The lame man at the Beautiful gate. 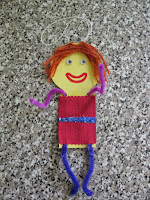 This week's simple craft at Toddler Praise was similar to last weeks. This time however, I am using up something I've been hoarding for a while, left over oddments of material. I made my youngest son a patch work lion a few months ago but I didn't throw out the off cuts. Most people would, but now these strips of material are coming in useful for this craft, making the clothes for the lame man in our story.


The thing about being a crafter is you tend to hoard things. I hate to throw anything useful (or even semi-useful) out. I have cupboards of nonsense, actually no, I should say rooms of nonsense. We live in a Victorian vicarage, big rooms and all full of stuff. The problem with big rooms is you can hide things away and forget about them but this habit comes in useful when crafting. Margarine and ice cream tubs are handy for storing or transporting things in. Two posts ago - ascension - I did a craft using old shoe boxes and wool, that I've had for many years. Today's craft involves a hole punch; the left over circles of paper could be used for eyes, if there are no googly eyes to be used. There are so many examples I could mention of recycling stuff but you'd get bored reading.


This story in Acts comes very soon after the disciples have received the Holy Spirit. Peter and John go to the temple to pray, they pass through the beautiful gate. A lame man, who has been crippled since birth, asks them for money. They tell him they have no money but instead heal him in the name of Jesus. The man gets to his feet and finds himself walking and jumping, he praises God for being healed. Those who knew the man were amazed at his healing.


Today's craft we are making a card puppet of the lame man at the beautiful gate. With these the children can re-tell the story, making the puppet sit down and then when he has been healed, he can dance around praising God.


Prepare prior to session


1.    Card person: draw around a small cup for the head, using ruler draw a rectangular body, with rounded shoulders.


5.    Cut down pipe cleaners to desired length, I cut into thirds.


6.    Cut strips of material or paper for clothes.


1.    Using cellotape, stick the length of wool/thread/string to the back of the head.


3.    Draw a really happy mouth with a felt tip, unless covered in glue then wait until dry.


4.    Thread 4 pipe cleaners through the holes in the body, bend over the ends and twist, keep them loose they need to move. All the children will probably need adult help for this.


5.    Glue on the strips of material/paper for clothes.


If you have time, make them more puppet like: using lolly sticks (or similar) make a cross and tie string from the lolly stick to the hands. This is a bit fiddly, which is why we didn't do it in our session at Toddler Praise this week.


Whichever way you choose to do this craft, the kids will have a lot of fun and can then go home and tell their families about how Peter and John healed a lame man, acting it out with the puppet.

Newer Post Older Post Home
Subscribe to: Post Comments (Atom)
Welcome to my blog of bible related toddler/preschool crafts. These crafts are simple and generally cheap to make; nothing spectacular, requiring expensive materials. I run a toddler service called Toddler Praise, with my husband Rev Alastair Ferneley at St Luke's Church, Scarborough, England. Each week I create a craft that is suitable for 4 year olds to achieve independently and 1 year olds to have a go at, with help. They are always tried and tested by our toddlers first. I believe ideas should be shared, then others can be inspired. I hope you find them useful.