This week's simple craft is going to be mostly appreciated by those who are keen on recycling and re-using useful things, that many would just throw away. As I mentioned in a previous post, I'm a hoarder, I can't throw out things I know that could be used for something else at a later stage. So, fellow hoarders and recyclers, you are going to like this craft.

﻿﻿
This week at Toddler Praise we learnt about Naaman, who is told to wash in the River Jordan. I wanted to make a washable Naaman but this was a problem, waterproof materials that can be washed aren't cheap and the other ideas I came across didn't really fit. How could I make a simple toddler craft that was cheap to produce and allowed the children to wash Naaman clean?


Pinterest, as ever was a saviour, what can't be found on that site. I put waterproof material into the search box and discovered the most amazing way of making strong, waterproof material, made using only plastic carrier bags. And this material can be used to make all sorts of things like bags and purses, it's easily cut with scissors and sewn with a sewing machine, but is strong. It was perfect for the leprous skin of Naaman. However, though the material is easy to make, this craft does require quite a bit of preparation but it is fun to do.


Naaman was a great warrior, he was not from Israel but Damascus in Syria, he was in the Army of King Aram, who were often at war with Israel. Despite being a great warrior, Naaman had a problem, he had a horrid skin disease that could not be cured. Naaman's wife had a servant girl who was from Israel, the girl told the wife that there was a prophet in Israel called Elisha, who could heal Naaman. Naaman asked King Aram if he could visit the prophet, the King wrote a letter to the king of Israel asking him to heal Naaman.


The king of Israel thought King Aram was trying to start a war, he said, "How can I heal this warrior, I'm not God, he is just trying to pick a quarrel with me." The king of Israel tore his robes at the request. Elisha heard of this and said, "Why don't you send him to me, I can heal him."


Naaman went to see Elisha, Elisha's servant came out and told Naaman to wash in the river Jordan seven times. Naaman was angry, he expected better treatment from Elisha, who had not come out himself to tell Naaman. He did not want to wash in the a dirty river, when there were so many lovely rivers back in Syria that he prefered to wash in.  Naaman's servant said to him, what harm could it do, to do as the prophet had said. If Elisha had told him to do a great heroic act, Naaman would have done so, why not do something so simple. Humbled, Naaman dipped himself seven times in the Jordan, on the seventh time he came out and was completely healed of his skin disease.


Naaman tired to give Elisha great wealth in payment but Elisha was not interested, for he was only doing what God asked of him. Elisha asked Naaman to only worship the true God from now on.


Making the waterproof material is very simple and only takes a few minutes. Make sure the bags are clean and empty and as plain as possible. Colour doesn't really matter. 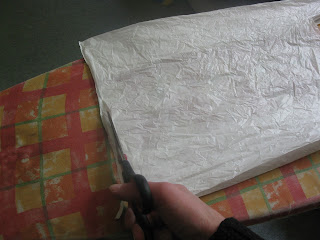 1.    Flatten carrier bag and cut off the seam at the bottom and the handles. If there is a picture or writing on the bag, turn them inside out.


2.    Lay four bags on top of each other (that makes 8 layers of plastic), as flattened as possible.


3.    Put a layer on baking paper under the bags and another layer on top, to cover the plastic completely. 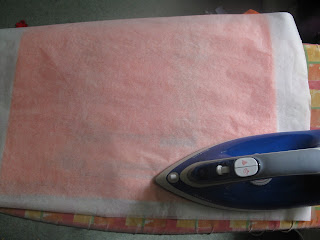 4.    Turn the iron to the hottest setting and iron over the baking paper, take care not to iron any plastic. The plastic bags will shrink and fuse together.


6.    Leave to cool a moment before peeling off the baking paper.


3.    Wash Naaman in water; a brush or fingers might be required to wash the paint off. We used paper towels to finish the last bits off.


Naaman can be reused many times as he is waterproof. This was a popular craft, the children really enjoyed washing away Naamans sore skin disease and then went on to play with them later, and in some cases chew them.


We have more photo's of the craft on our Facebook page, do check it out.

Newer Post Older Post Home
Subscribe to: Post Comments (Atom)
Welcome to my blog of bible related toddler/preschool crafts. These crafts are simple and generally cheap to make; nothing spectacular, requiring expensive materials. I run a toddler service called Toddler Praise, with my husband Rev Alastair Ferneley at St Luke's Church, Scarborough, England. Each week I create a craft that is suitable for 4 year olds to achieve independently and 1 year olds to have a go at, with help. They are always tried and tested by our toddlers first. I believe ideas should be shared, then others can be inspired. I hope you find them useful.